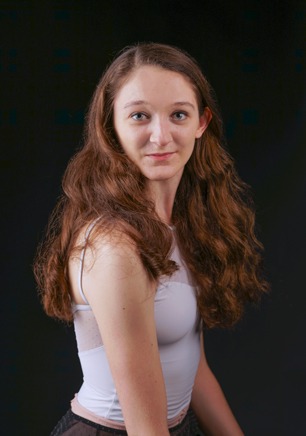 
Video – Get to know Colleen

Colleen Hoopes grew up in Rochester, New York. She began her professional ballet training at the Draper Center for Dance Education under Jamey Leverett, Beth Bartholomew, and Fidel Orillo Puga. She attended Indiana University’s Jacobs School of Music on scholarship, and had the privilege of studying under Violette Verdy, Christian Claessens, Shawn Stevens, and Michael Vernon. During her time at IU, she performed in Balanchine’s Swan Lake, Rubies, Concerto Barocco, Serenade, and Divertimento No. 15, as well as Michael Vernon’s The Nutcracker and Sasha Janes’ Saudade. She graduated from IU in 2017 with a Bachelor of Science in Ballet and an Outside Field in Political Science. After college, she joined the Rochester City Ballet under the direction of David Palmer. In 2017, she joined Ballet Arizona. With BAZ, she has performed in Ib Andersen’s Swan Lake, The Nutcracker, Cinderella, and Eroica, as well as Balanchine’s Square Dance, Western Symphony, La Sonnambula, and Symphony in Three Movements.