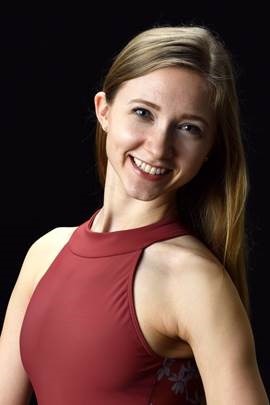 
Erin Mesaros began her dance training at the age of five near her hometown in Eagle, Michigan. In 2015, she accepted a full scholarship as a trainee with the Orlando Ballet School and later joined the Orlando Ballet Second Company in 2016. During her time in Orlando, she performed in many of the company’s productions, such as Giselle, Don Quixote, Swan Lake, as well as, Michael Pink’s Dracula, Arcadian Broad’s Beauty and the Beast, and George Balanchine’s Serenade. In 2018, she joined San Diego Ballet as a company member, where she got to perform many lead roles and pas de deux’s in Javier Velasco’s choreographies, such as Rhapsody on a Theme, Don Quixote Grand Pas de Deux, and Que Bonito Amor.