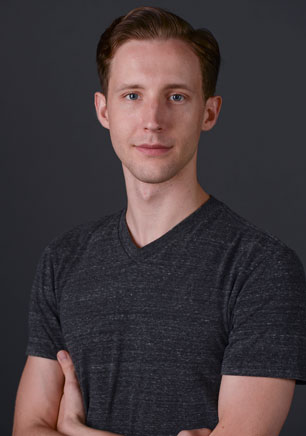 
Video – Get to know Jackson

Jackson Dwyer was born in Montreal, Canada. He began his professional ballet training in the sixth grade when he was invited to attend Canada’s National Ballet School. He graduated in 2009 and was a recipient of the Lawrence Haskett Scholarship and the Peter Dwyer Award for that year. His post-graduate year, 2009-2010, was spent in Stuttgart, Germany training at the John Cranko Schule. He was a 2010 YoungArts National Foundation for the Advancement of the Arts winner.

Mr. Dwyer joined the National Ballet of Canada in 2010 as an apprentice and was promoted to Corps de Ballet in 2011. He danced with the company for five seasons and during that time worked with some of today’s most accomplished choreographers such as John Neumeier, Alexei Ratmansky, Christopher Wheeldon, James Kudelka, and Crystal Pite. He performed in many ballets in the company’s repertoire, including soloist roles in Alice’s Adventures in Wonderland, Cinderella, and Romeo and Juliet.

Since joining Ballet Arizona for the 2015/16 season, Mr. Dwyer has performed the title role in George Balanchine’s Apollo, as the third principal in Symphony in 3 Movements, and the Cavalier in the Nutcracker.  With BAZ he also danced in Rubies, Agon, Square Dance, Western Symphony, Topia, Rio, Rigged Games, Pines of Rome, Coppelia, The Sleeping Beauty, Symphony Classique, Konservatoriet, Round, Romeo & Juliet, and La Bayadere.